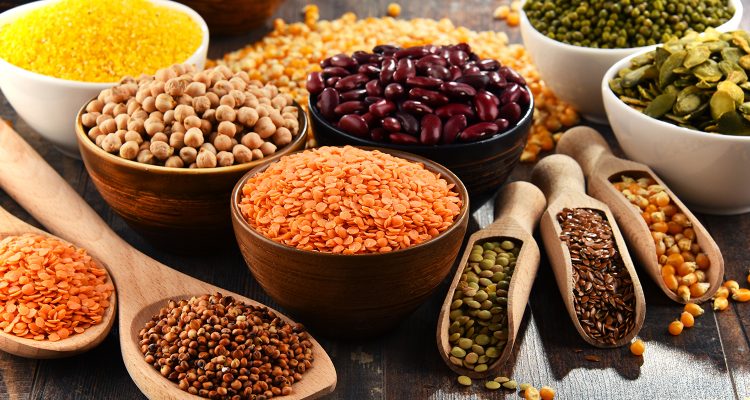 How many of us simply aren’t eating enough wholegrains – and how increasing our intake could benefit our health and wellbeing. Also the crucial stage in pregnancy that could affect our children’s eating behaviours, and why signing up for a fitness challenge could be the greatest thing you do for your body today.

We know that a healthy, balanced diet is the key to a healthy body, but it can be tough knowing exactly which foods are the healthiest for us, with the constant barrage of new studies and research branding certain foods as either hero or villain when it comes to our health. One food group that has been given a pretty bad rep over the past few years is carbohydrates. The common perception now is that the fewer carbs we eat the better, with some of us avoiding carbs altogether… but is this really a healthy option for our bodies? Well, frankly, no.

Of course, we know that starchy, refined carbs aren’t great for us – and we do eat far too much of them, so cutting back is a definitely a good thing. But cutting carbs out altogether? Carbs can help us feel full and provide us with a lot of healthy nutrients and essential fibre – we just need to make sure we are eating the right sort. Vegetables are a great source, and another particular group that is getting seriously neglected is wholegrains.

A study from the British Journal of Nutrition found that 80% of us are simply not eating a healthy level of wholegrains – and one in five may not be eating any at all! Not that I’m surprised, with so many people demonising all carbs, or, when they do indulge, choosing the more popular, starchy white carbs.

So what’s the difference between the two, and why does it matter?

Grains are made up of an inedible, protective husk and a kernel which has three layers – bran, germ and endosperm. Wholegrains contain all three parts of the kernel – and so keep the maximum nutrients. Processing these grains to make refined carbohydrates means removing the bran and the germ, which contain a whole host of antioxidants, B vitamins, protein, minerals, healthy fats and fibre, leaving only the endosperm. 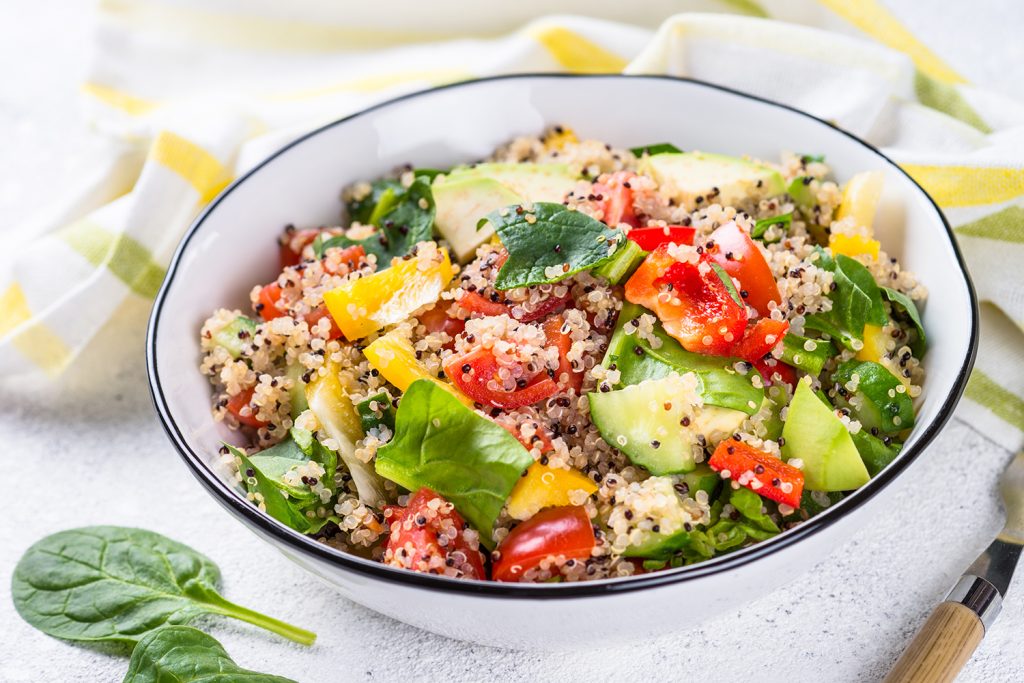 Refining means that about 25% of protein is lost, along with at least seventeen key nutrients! It is possible to add back some vitamins and minerals to enrich these refined grains. But why not stick to the unadulterated and healthier wholegrain in the first place?!

What’s more, products made from refined white carbs are more likely to contain higher levels of fat and sugar, but, because they’re refined, they’re not as filling, meaning we eat larger portions in order to feel full. Which doesn’t help our weight-loss attempts and explains why so many of us will feel bloated, or sluggish after eating a huge bowl of white pasta or rice. In contrast, wholegrains are higher in fibre -meaning we will feel fuller for longer, with smaller amounts.

Importantly, though, wholegrains have been linked to all kinds of health benefits, including lower body weight, BMI and cholesterol levels, as well as reduced risk of diseases such as cardiovascular disease, type 2 diabetes and certain cancers too. What’s not to like?!

How much should you be eating?

The minimum the study authors recommend is 48g. This equates to around…

Chris Seal, who led the research team suggests that just small tweaks to our diets… replacing white rice and pasta for brown, or eating porridge or a wholegrain cereal for breakfast – could have a major impact on our health. Just as we recommend to users, it’s not about making drastic shifts in your lifestyle… just small, manageable changes, that over time become completely natural to us.

Swapping refined carbs for wholegrain ones is a great place to start and try to hit the 48g minimum if you can. Watch out though – some manufacturers try to dupe us into thinking a product is healthier than it is. For example, the breads that are just coloured brown to make them look healthier, and seeded and malted loaves made from white flour with small amounts of bran added in afterwards.

Mann, K D et al. Whole grain intake and its association with intakes of other foods, nutrients and markers of health in the National Diet and Nutrition Survey. British Journal of Nutrition. 2008-2011

health, and your baby’s. But it seems that how we eat during certain stages of pregnancy could actually impact our children more than we realise!

A recent study, from the University of Adelaide, looked at exposure to junk food at various stages in our lives, and how this can impact our long-term diet-choices. They found that children born to women who ate junk food during the later stages in their pregnancy were more likely to have a preference towards junk food.

Of course, any food that you eat during pregnancy can affect your child at different stages of their amazing transformation from a couple of tiny cells to a mini human-being, but this research actually suggests that it is in the late stages of pregnancy that children are developing preferences towards certain foods. So even if you succumbed to unhealthier cravings earlier in your pregnancy, you could actually redeem it later on, by eating as healthily as you possibly can in the late stages. Not only will it put you in the best shape to cope with the strains and exhaustion of new motherhood, but it may help avoid those future anti-vegetable, dinner-time struggles that so many of us have gone through (and still do, in my household!). 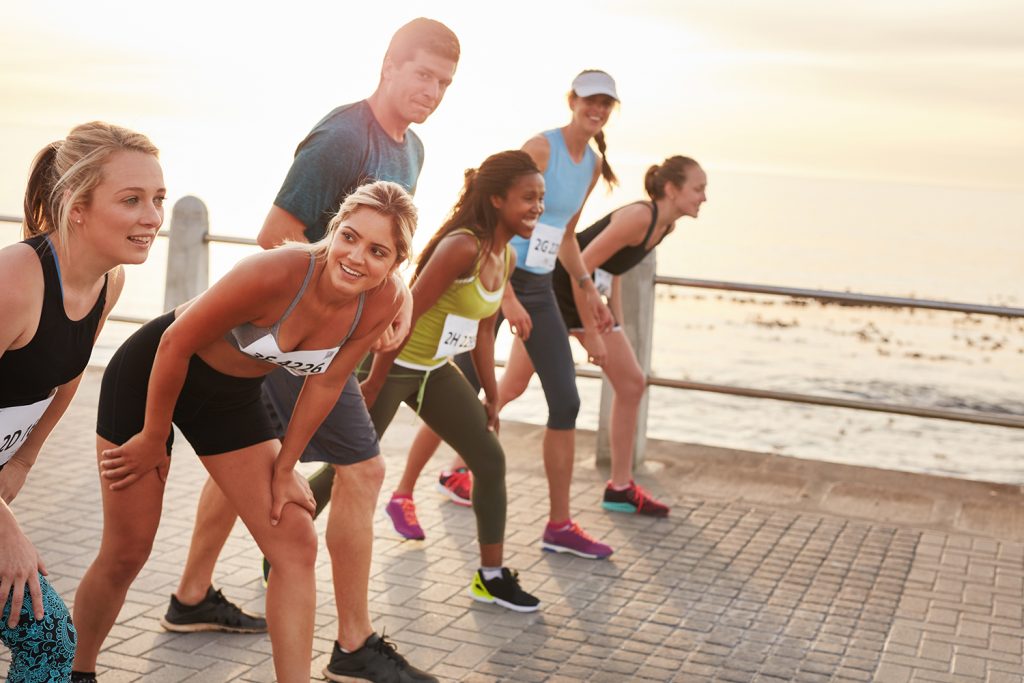 As a keen runner (well, more like a gentle jogger, truth-be-told), and all-round promoter of keeping fit and active, it’s always good to see people take that step towards learning to love fitness. For many, once you’ve got that fitness bug, there’s no going back (that rush of endorphins you get after a great workout is addictive!) – but actually getting to that first step can be easier said than done.

There are so many barriers you can put up for yourself – particularly if you’ve not exercised properly before and are worried you’ll look stupid, or that you’ll be too unfit. Or why not join a 10K challenge? It’s suitable for anyone regardless how fit you are. Plus it’s also an opportunity to raise money for your favourite charity.

It’s great to see the focus on charity fitness events that seem to have taken over in the past few years. Events like ‘Race For Life’, and ‘The Colour Run’ are such a good way to get people taking part in something active – whilst also raising money for great causes. And because they’re pretty light-hearted, and casual, they’re great for those people who want to do something with their fitness, without too much pressure.

Around the country, there are tons of events like this going on – and this time of year seems to be pretty hectic with them! So for any of you reading this who fancy getting into a bit of fitness, then why not  sign up to a fitness event near you – drag some friends along, and give it a go… what are you waiting for?