Imagine you’re walking along the street and you accidentally walk in front of someone. What generally happens? Assuming either of you even notices, the chances are you’ll apologise and carry on without giving it a second thought. Now picture the same scene in a car. It’s likely that it ends up with you or the other driver gesturing, shouting or sounding their horn, right?

So why is there such a change in our attitudes when we get behind the wheel? There are lots of theories but one thing is certain: it’s a very real problem and it’s getting worse.

In line with our commitment to looking after your health as well as your insurance, here at Vavista we have looked at how to handle road rage starting with actions you can take to avoid it, what to do during a road rage incident, and things you can do afterwards, so you can put it behind you and avoid the harmful stress that it generates.

According to a CarWow survey, four out of five UK drivers have been on the receiving end of road rage. Worryingly 15% said they’d been involved in 10 or more road rage incidents. UK motorists are also more likely to face road rage than those driving in France, Germany, Italy, India and the US.

If you suffer from road rage

Plan ahead and allow plenty of time for your journey: Road rage is caused by anxiety, so knowing where you’re going and how you’re going to get there removes uncertainty. This in turn can prevent drivers feeling tense and minimises the chances of them becoming aggressive.

Be forgiving: Cut other drivers a little slack. We are all human and all make mistakes at the wheel. Their behaviour might be irritating, but are you going to change it or make the situation better by getting wound up? Probably not, so it’s best to chill out.

It’s nothing personal: That driver who’s doing 20mph in a 40 zone? Maybe looking for an address. The other one who’s driving too close behind you? Maybe they’re late for a life-changing meeting. Again, we have probably been in that situation ourselves and it’s nothing against you personally, so relax. 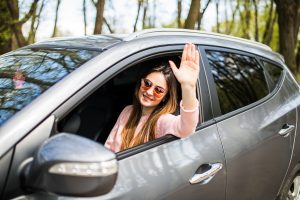 What to do during a road rage incident

How to drive: If someone’s driving aggressively behind you, just find a safe place to pull over and let them go. Don’t inflame the situation by braking suddenly or stubbornly maintaining your position in your lane.

How to act: If someone does display road rage try apologising, even if it’s not your fault: there’s a very good chance it will pacify the other person and could prevent the situation escalating to a confrontation.

If they get out of their car to remonstrate with you, ignore them. Don’t be tempted to unlock your door or open a window to remonstrate back. Don’t make eye contact or react in any way that they can see.

What to do: If the other driver follows you, drive to a well-populated area like a petrol station. They’ll have CCTV cameras which gives you time to call for help and wait for the police from the safety of your car while being observed on camera.

Is it you? If road rage keeps happening to you, it might be down to the way you drive. Maybe you’re overly assertive or have fallen into some bad driving habits that wind others up, like not indicating. If it’s happening often, think about how you engage with other road users, or take a refresher driving course.

What to do afterwards

Feeling a bit shaken up? pull over somewhere safe as soon as you can and take a quick walk to burn off some of the adrenaline that’s coursing through your system. Maybe call a friend and talk about it if you can.

Distract yourself: listen to the radio so you can move your mind onto something else and not dwell on the incident.

Could someone else be at risk? If you feel the other driver was overly aggressive, consider reporting the matter to the police.

Reflect on the experience: Try to understand how it happened and what you could do differently? Was your driving to blame? Did you inflame the situation at all? Was there anything you could have done differently?