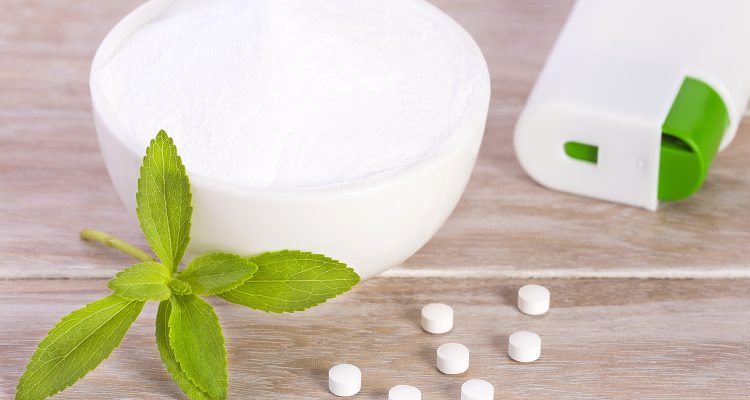 The World Health Organisation recommendations are that we should be trying to restrict our sugar intake to just 5% of our total calorie intake and certainly no more than 10%. That equates to around 6-12 teaspoons a day and has created a media flurry.

With so much bad press around sugar there is going to be a rush towards sugar substitutes or sweeteners to satisfy our increasingly sweet tooth –with over half of us already buying some form of artificially sweetened products each year. The global market for such sweeteners in 2010 was apparently over US $1 billion. They are supposed to help us reduce our weight – but do they? They have been marketed as healthier options than sugar – but are they? And are they all the same or are some better than others?

Seems like an urgent review of the latest evidence on sweeteners is needed…so read on.

Do they help our weight control?

An increasing number of studies on sweeteners show that they may not! A recent study showed that obese adults who drank diet drinks actually consumed more calories than their counterparts who drank the sugary alternatives!

Other studies have shown that giving artificial sweeteners before a meal can actually increase the amount eaten, unlike natural sugar. Sugar contains energy, which is what our body is trying to obtain. If we have sugar, our hunger response is therefore dampened and we feel the need to eat less afterwards. Our body isn’t stupid – if we have artificial sweeteners with no energy content it is still looking for energy sources elsewhere and we may then eat more than we have saved by having the artificially sweetened product in the first place. In addition artificial sweeteners do not seem to activate the reward pathways or “pleasure zones” of the brain in the same way as sugar – so they don’t give us the satisfaction we expect and we go looking for more.

Furthermore, by using artificial sweeteners we are encouraging our sweet tooth. These sweeteners can be up to 13,000 times sweeter than sugar (yes, 13,000!), allowing them to be used in small quantities with negligible calories. This may encourage us to have more proper sugar in other forms – drink or food – and gain weight as a result.

Rather than continue to encourage our sweet tooth, we would be better off substituting sugary drinks for water and gradually reducing our taste for sweetness. If you reduce your sugar cravings you are likely to be making calorie savings in other areas as much of the sugar we eat is packaged with fat and other calorie-dense foodstuffs.

But are they safer than sugar?

All of the approved sugar substitutes out there have gone through testing processes – though some have been more rigorously tested than others. An earlier form of sweetener called cyclamate was actually banned by the FDA (the US Food and Drink Administration) due to concerns about carcinogenic (cancer-causing) risks.

However, sweeteners are tested as food additives – not in the same rigorous way that medicines are tested – as they are generally presumed to have no major impact on the body’s natural processes. But, some researchers feel that they aren’t as ‘inert’ as claimed and are calling for more in-depth research. A full scientific review of sweeteners at the end of last year was unable to prove harmful effects, but unable to exclude them completely either – with limited evidence that they are either better or worse than sugar. The safest option, therefore, is simply to reduce our sweet tooth and cut down on both sugar and sweeteners. Forget fizzy sugary drinks and their artificially sweetened, chemically packed alternatives. Give me a glass of water any day.

However, one potential benefit of sweeteners is that they may help us kick the sugar habit as they cause fewer swings of blood sugar, which can encourage us to eat more. So, if you do want to use sugar substitutes whilst you reduce your sweet tooth – what are the different options out there?

Sugar substitutes can be divided into artificial sweeteners, natural sweeteners and sugar alcohols.

The distinction between artificial and natural can be blurred as many naturally sourced sweeteners are then tweaked and pummelled and processed into something that is not that natural at all! Also, just because something is natural, doesn’t mean it’s good for us. Who would recommend eating toadstools, for example?!

Artificial sweeteners include aspartame, marketed as NutraSweet and Canderel, and found in many popular “diet” foods and drinks. Despite concern about premature births and the fact that it may be broken down in the body to formaldehyde, the European Food Standards Agency has recently reported that there is no evidence to suggest there is a health risk from aspartame in standard doses (unless you suffer from a rare disease, phenylketonuria).  Interestingly, a recent review showed that all of the industry funded studies of aspartame found it safe – whereas 92% of independent studies found side-effects which calls into question the element of bias in the industry funded studies. It remains controversial but is very widely used.

Another of the artificial sweeteners is sucralose or Splenda, also widely used as, despite its similar taste to sugar, it does not produce tooth decay. Again, the FDA has found this to be safe, but one American consumer body downgraded its advice from ‘safe’ to ‘caution’ recently pending results of a study linking sucralose to leukaemia in mice . A recent review suggests that sucralose may form toxins when cooked at high temperatures – despite claims that cooking with it is safe. In addition, one controversial study suggested it may affect the levels of healthy bacteria in our gut and there is even some concern at the fact that sucralose, which doesn’t break down easily, is accumulating in the environment with potential problems for the future. However, it is one of the most closely studied sweeteners on the market.

Saccharin (Sweet’n low) and Acesulfame-K are also artificial sweeteners used in many baked goods, gums, jams, salad dressings and other products including toothpaste, lip gloss and mouthwash. Acesulfame-K has not been found to have significant risks – however, it underwent testing in the 1970’s when testing methods were less sophisticated..and it has not been properly tested since.

Studies on saccharin have found that it actually increases food consumption and may lead to weight gain. Initial concerns that it could cause cancer in rats do not seem to apply to humans at the recommended limits, however some studies of children find that they are consuming at least 50% more  than the daily recommendations. 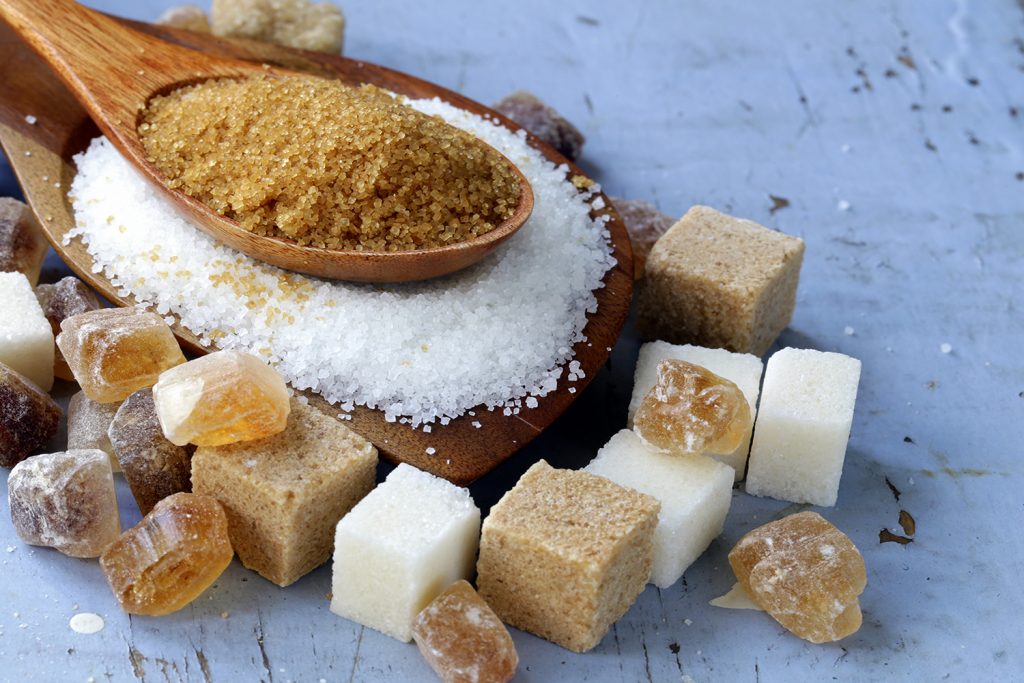 These sweeteners have some similarities with sugar and with alcohol – but they are not alcoholic and contain about 40% fewer calories than sugar. These include xylitol and sorbitol. They are not actually sweeter than sucrose, unlike other sweeteners, and so we can simply substitute them in similar quantities – however, they aren’t broken down in the same way as normal sugar. That can result in problems with diarrhoea for some people if taken in large quantities. However, it also means that they don’t have the same effects on blood sugar levels and the way we process fat and carbohydrate as well as having a protective effect against tooth decay making them another possible alternative to sugar.

Marketed as ‘natural’ stevia is derived from the plant Stevia Rebaudiana Bertoni which is native to South America and has been used in Japan for over 20 years with no negative side-effects reported so far. In addition, it seems to reduce the amount people eat, so may help weight loss unlike some of the other sweeteners. Whole-leaf or crude Stevia has not gained FDA approval so far due to concerns about possible side effects including low blood pressure but the sweet highly refined component of it has.

Agave nectar is highly controversial as it contains very high levels of fructose (up to 90%). Although that means it has less effect on blood sugar levels, fructose is increasingly thought to be associated with type 2 diabetes and the metabolic syndrome, kidney and liver disease. It has slightly more calories than sugar, but is a bit sweeter so can use less of it…in effect the calorie count is the same…so I struggle to see the benefit of this as a sugar alternative. And that goes for honey too in case you were wondering! Although honey does have some extra nutrients and anti-bacterial properties that some feel make it a better choice than standard sugar. However, even an ardent honey enthusiast recommends no more than 1 teaspoon of high-quality honey per day.

So, should we or shouldn’t we use sweeteners?

If you need to use them because you have diabetes, then you can be reassured that they have no major or immediate side-effects according to testing….but we almost certainly don’t have the full picture on safety yet so avoid them where you can.

If you are relying on them to help you lose weight, you may be mis-led… there is no clear evidence that they help and may even cause weight gain.

If you are simply worried about sugar and think you may switch to sweeteners, be cautious. We could end up taking them in far greater quantities than recommended which could make health risks more of an issue. It has taken a long time for the sugar concerns to come to the fore…. will we just be swapping one set of problems for another?

As I said before, it is probably best to avoid sweeteners, and sugar, wherever possible and instead work on reducing your craving for sweetness. The good news is that it isn’t that hard to do. Go cold–turkey and after a few days the cravings reduce, though if you do it gradually you will barely notice.

If sweeteners help you to do that, or give you the occasional sweet fix without the swings in blood sugar that may start you craving the white stuff again, then that’s fine. I try to avoid sugar most of the time, and use occasional xylitol or stevia… but will be keeping a close eye on all of the science to make sure no studies find problems with them or until I find a better sweetener is identified, so watch this space. However, I try to get my sugar fix from the occasional piece of fruit. Though fruit contains fructose, it also contains protective fibre…and no chemicals I haven’t asked for. I know where I am with an apple!